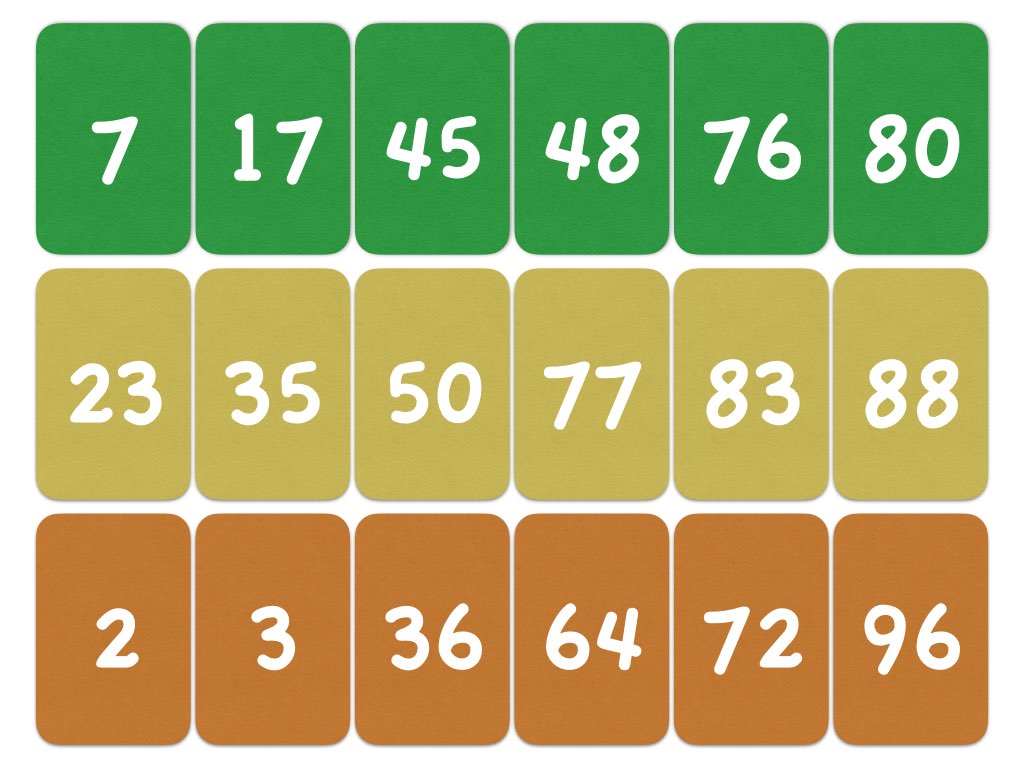 This is a game to give your students an intuition about fractions. Start by dividing your class into teams. Each team is randomly dealt six cards 1-100 (alternatively they can choose six numbers 1-100.)

I'm going to colour the cards to indicate which team they have been dealt to. 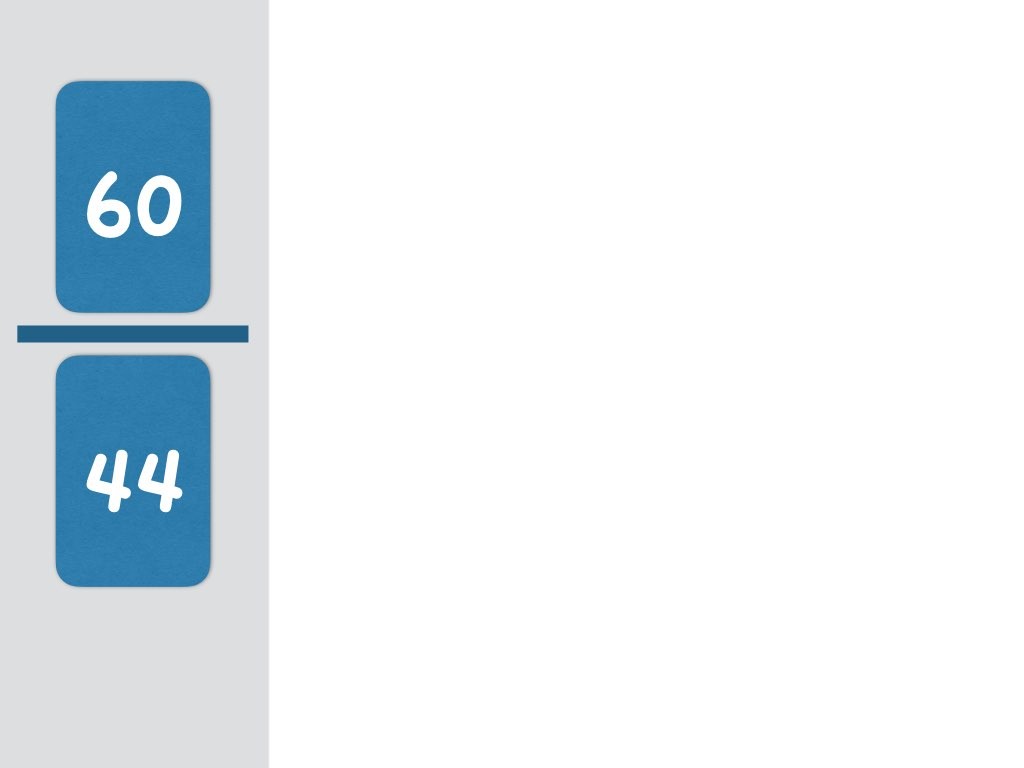 One team randomly chooses two cards from the deck to make a fraction. 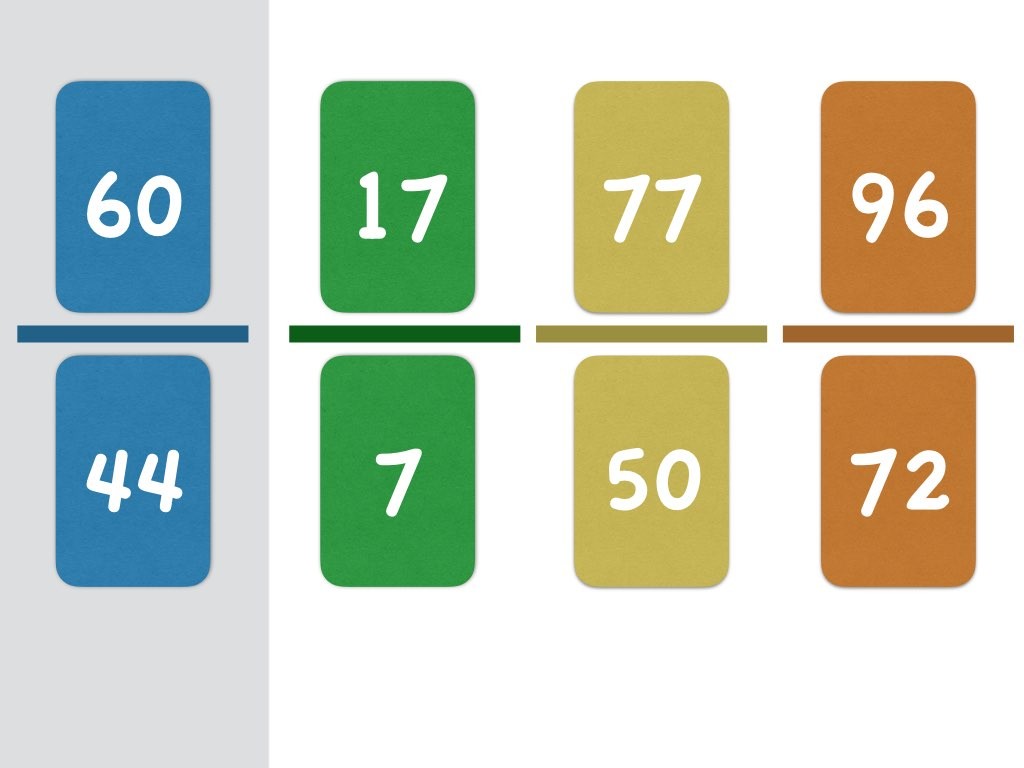 All teams have 15 seconds to choose two of their six cards and make a fraction. Who wins? 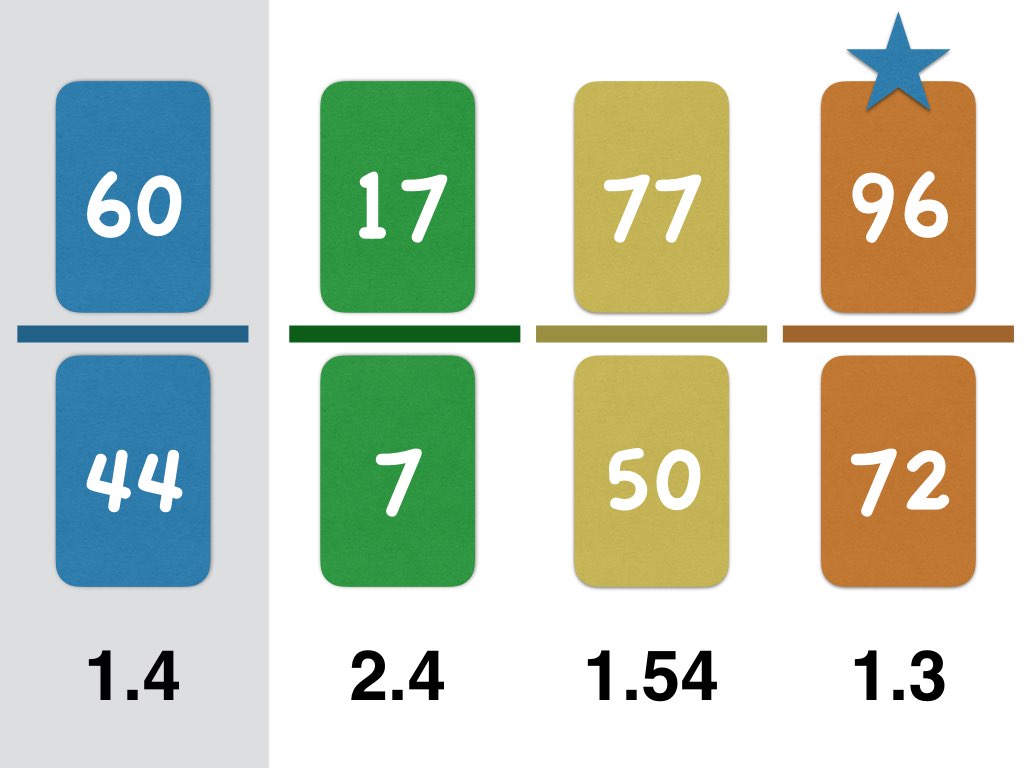 The winner is the group that gets closest to the number without exceeding it. in this case, the green and yellow teams have both gone over so are disqualified. The orange team wins. If all teams go over the team(s) with the smallest fraction wins. 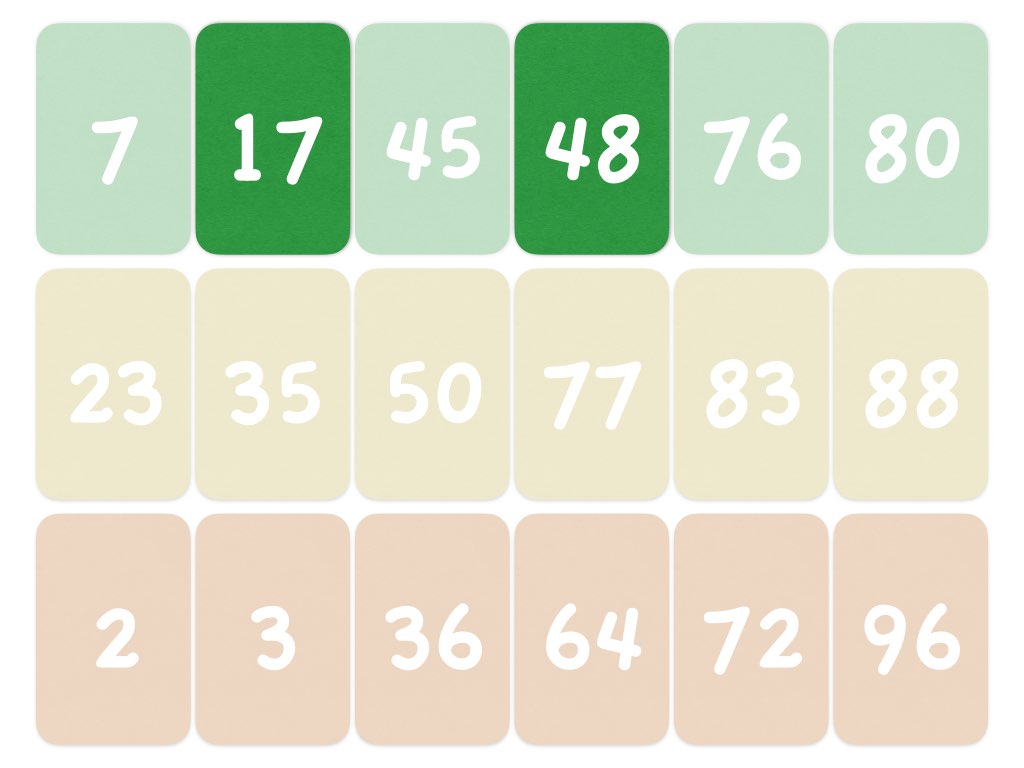 Alternatively, instead of choosing from the deck - the teams take turns selecting two of their cards - creating a fraction to challenge the other teams.

Here green team is going to make 17/48 or 48/17. The choosing team must figure out which of the other teams won. 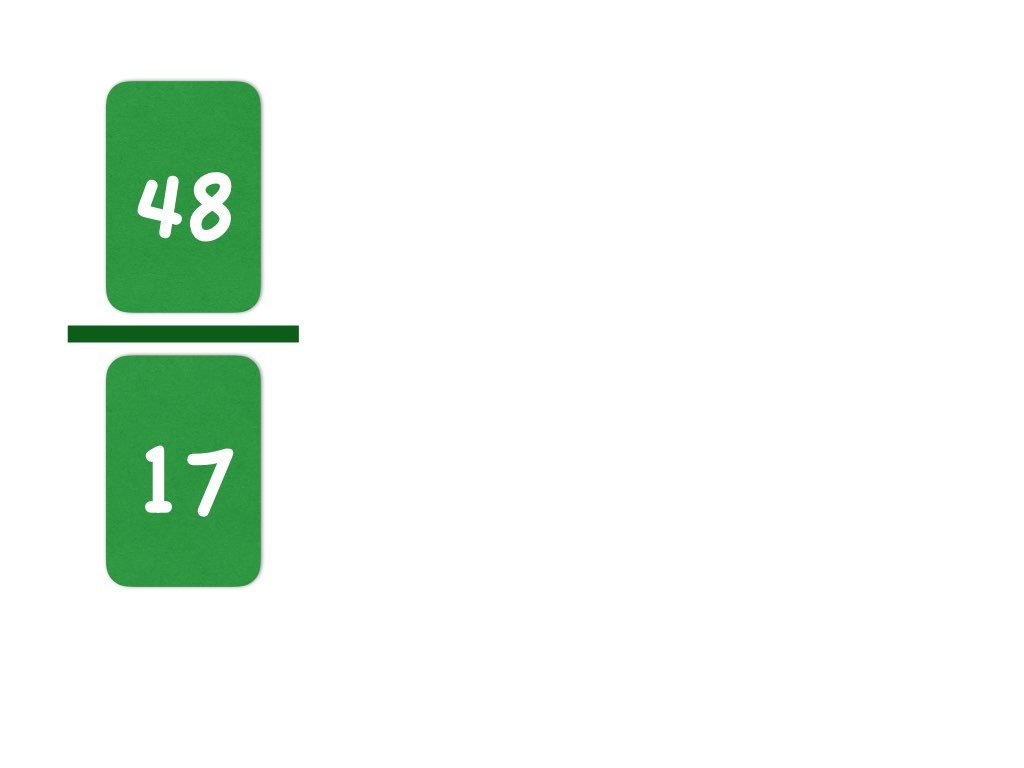 Green team has made 48/17. All other teams now have 15 seconds to make a fraction from their six cards. 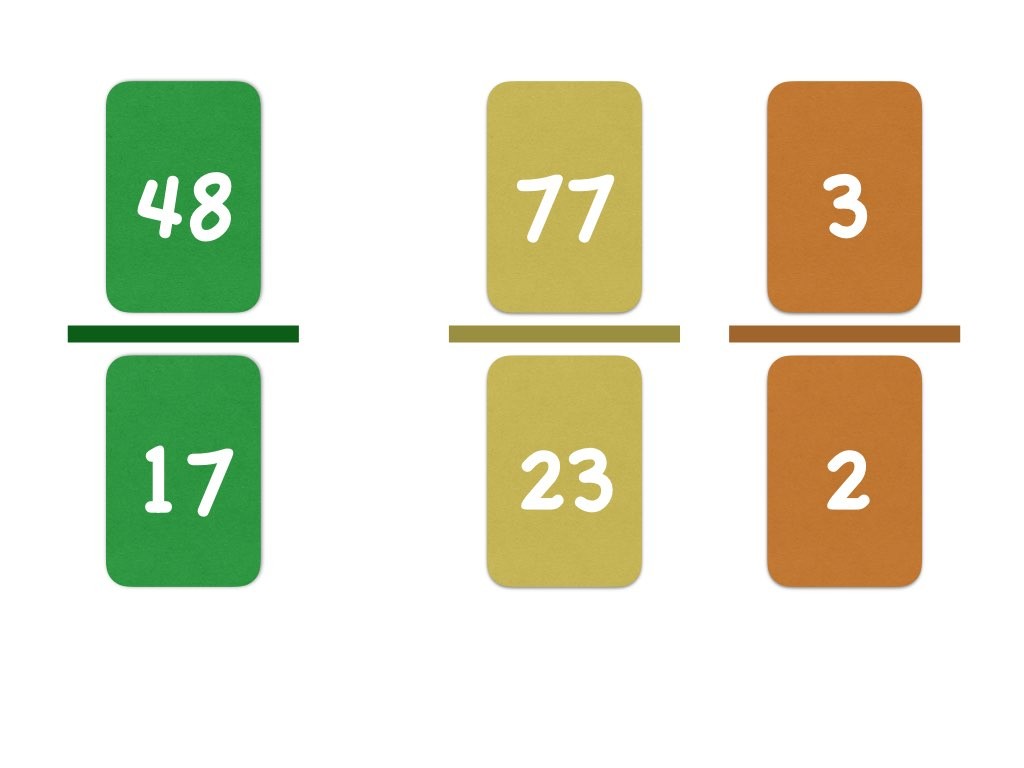 Yellow has chosen to make 77/23 and orange 3/2. Who wins? Try to figure it out before going on to the next slide. 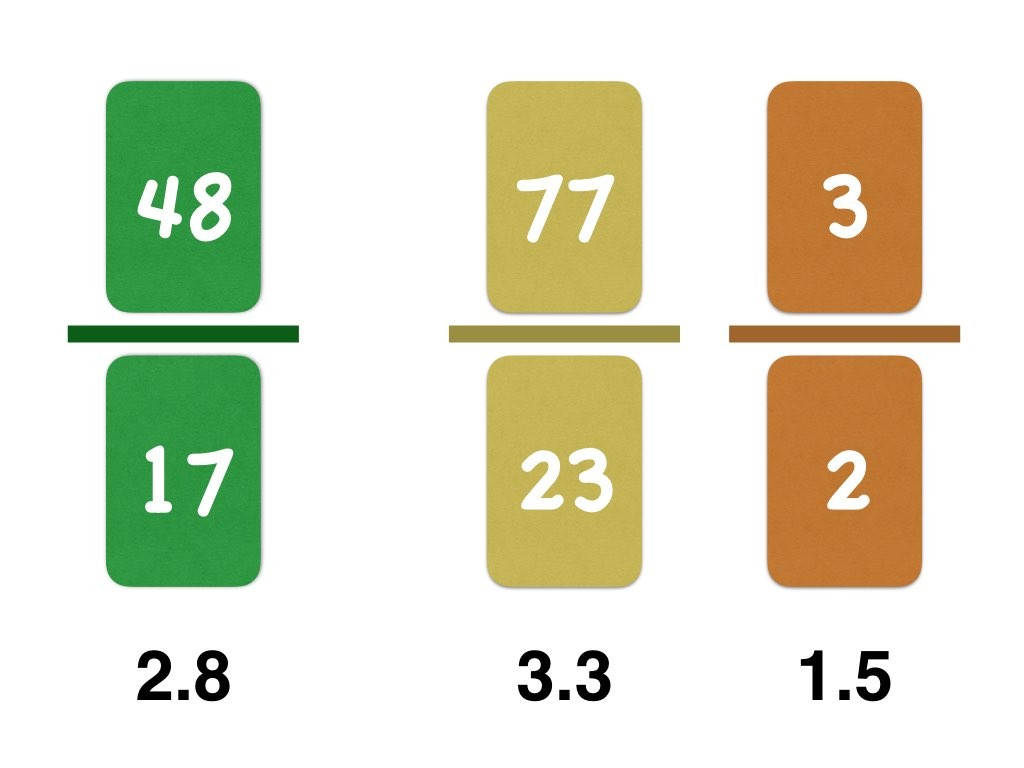 Yellow is too high. Orange wins.

This game is fun because the top kids in your class do not have time to figure out the best answer. 15 seconds is just too short 😉 The bulk of time in the game is spent calculating who won. 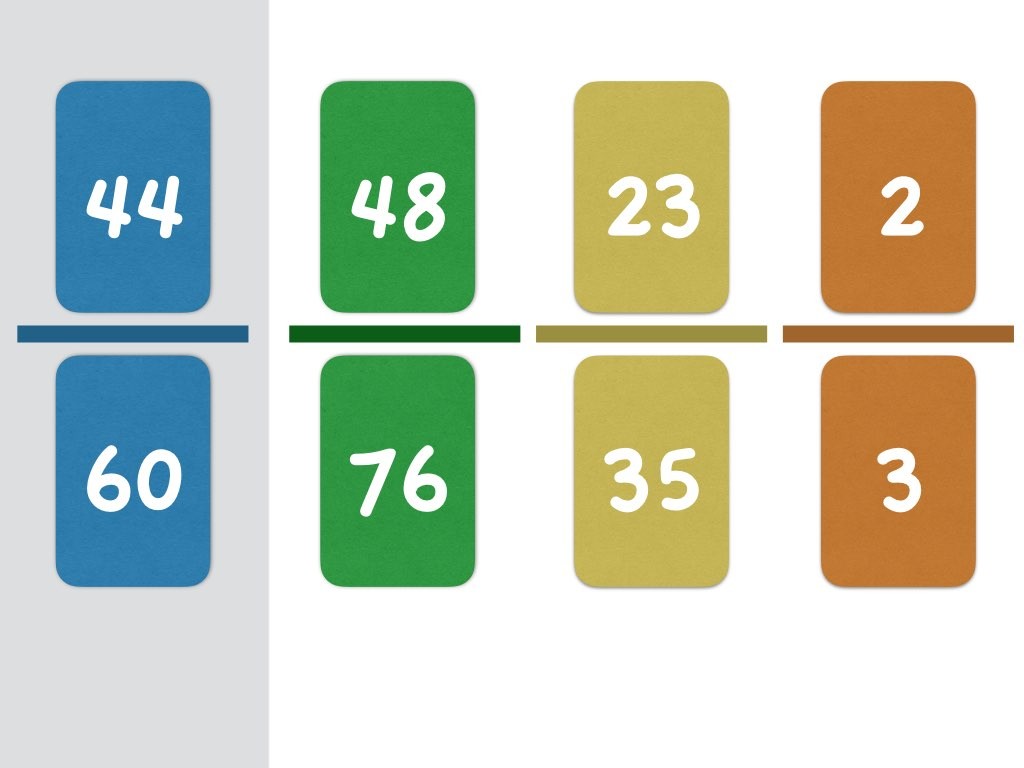 Let's imagine this blue fraction was chosen off the top of the deck... and the teams responded as shown. Who wins? Take a moment and figure it out. 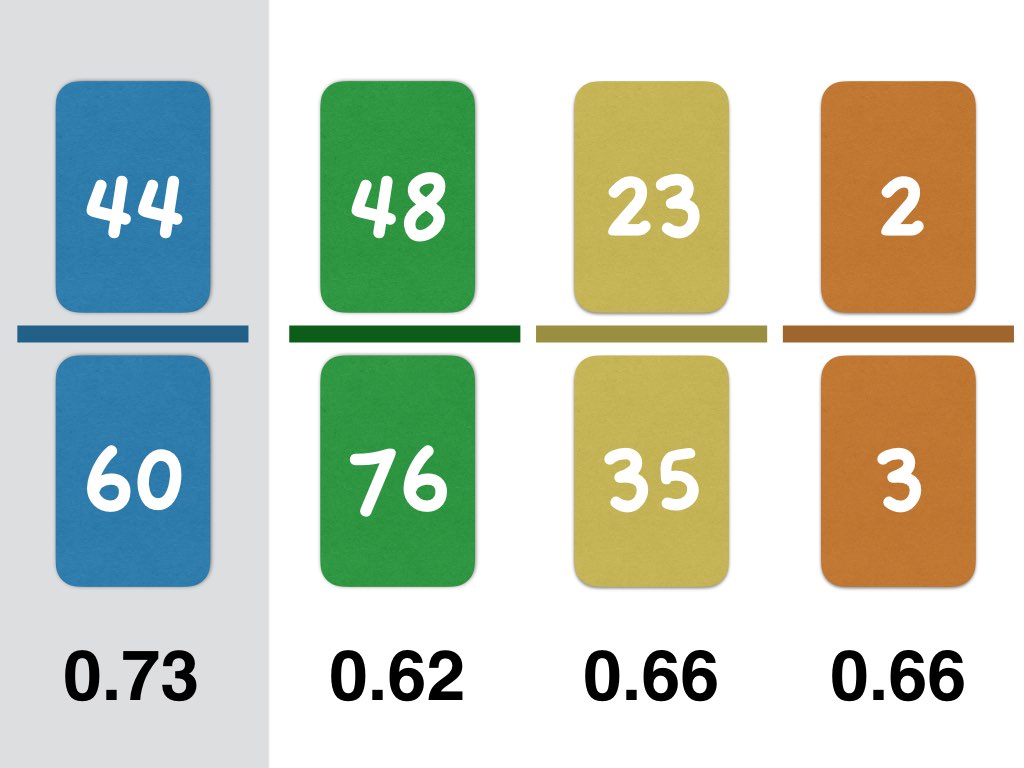 This is difficult! All teams submitted really good fractions. All are less than the blue fraction so none can be kicked out for being too big.

Kids should be encouraged to be lazy. Usually, there is no need to calculate past the first decimal place, but here there is a need to go to the third decimal place!

Who wins? Orange or yellow? 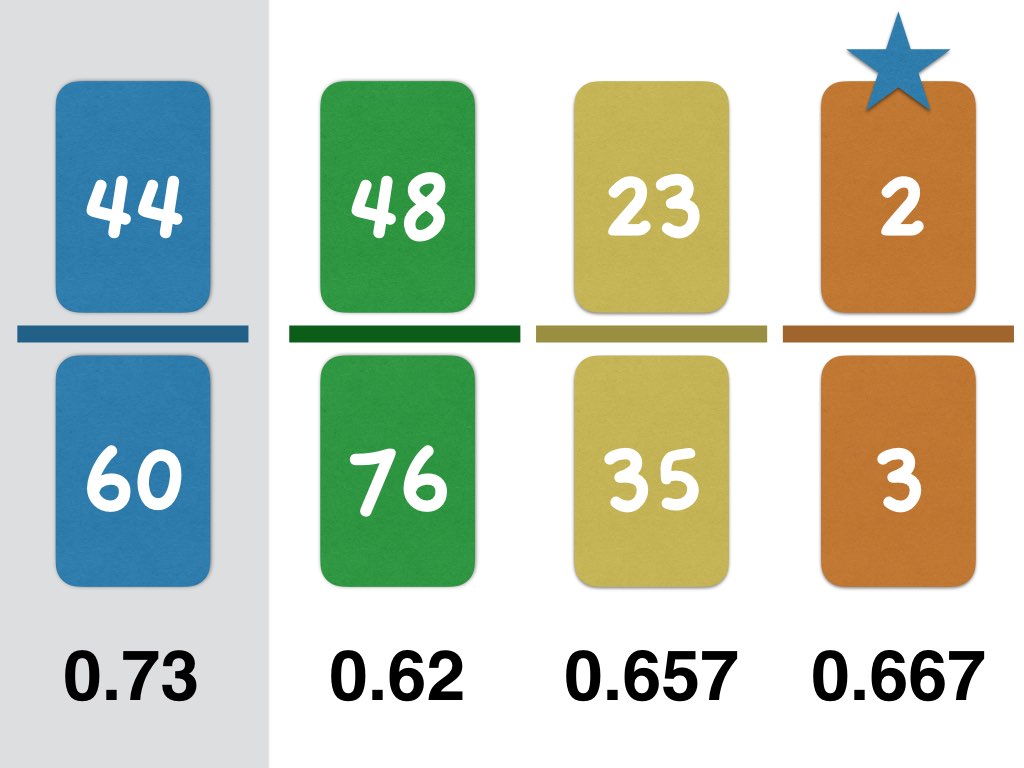 Orange wins again! It is a little bit closer to the blue fraction.

You can choose when to end the game. The next time you play ask the students to choose their cards instead of dealing them randomly. What does a good selection of cards look like? That's a nice discussion for your students to engage in.

Email me (gord AT mathpickle.com) with your stories of how Speed Guess Fraction worked in your classroom.

This game works because the top students do not have time to figure out the right answer so everyone has a chance to win. Keep the selection phase ridiculously short at 20 seconds.  The game is a great way to increase student intuition about the relative size of fractions. Enjoy!

Because of Omicron we have a lot of teachers absent and I am filling in all over the place. Yesterday I got to teach 4th grade math and had about 15 minutes to plan, and I knew the students had just started working on understanding decimals and connecting decimals to fractions.
I did a quick number talk in which the kids had to decide whether two fractions were equivalent or one was greater, and they developed some strategies like using 1/2 as a benchmark and noticing proportionality. We had a little discussion about whether 1/2 = 1÷2 and they had to prove it, then we played the game. It was great. Even though I had introduced it to them as “one of my favorite math games of all time,” I guess they were skeptical (understandable), because I overheard comments like, “wow, this is ACTUALLY really fun.” It was pretty amazing to hear the teams discussing their choices and how the game pushed them to understand fraction relationships. I could also reinforce the idea of fractions as division and the connection to decimals by asking them how we could accurately compare them, and then making a big dramatic show of typing each number into a calculator and slowly writing it on the board as they watched. Sometimes we rounded to hundredths but we also had to go into thousandths a bit so they got practice comparing and subtracting decimals to figure out who won. They did not want to stop playing at the end of class.
So, thanks for a great moment in the middle of some crazy times in education.
Amanda Fox

MathPickle puzzle and game designs engage a wide spectrum of student abilities while targeting the following Standards for Mathematical Practice:

Students develop grit and resiliency in the face of nasty, thorny problems. It is the most sought after skill for our students.

Students take problems and reformat them mathematically. This is helpful because mathematics lets them use powerful operations like addition.

Students discuss their strategies to collaboratively solve a problem and identify missteps in a failed solution. MathPickle recommends pairing up students for all its puzzles.

Students master the tools at their fingertips - whether it's a pencil or an online app.

Students learn to communicate using precise terminology. MathPickle encourages students not only to use the precise terms of others, but to invent and rigorously define their own terms.

Students learn to seek for shortcuts. Why would you want to add the numbers one through a hundred if you can find an easier way to do it?

Please use MathPickle in your classrooms. If you have improvements to make, please contact me. I'll give you credit and kudos 😉 If you are using MathPickle with adults, please mention the website. If you are from a private school, please ask parents or administrators to donate.